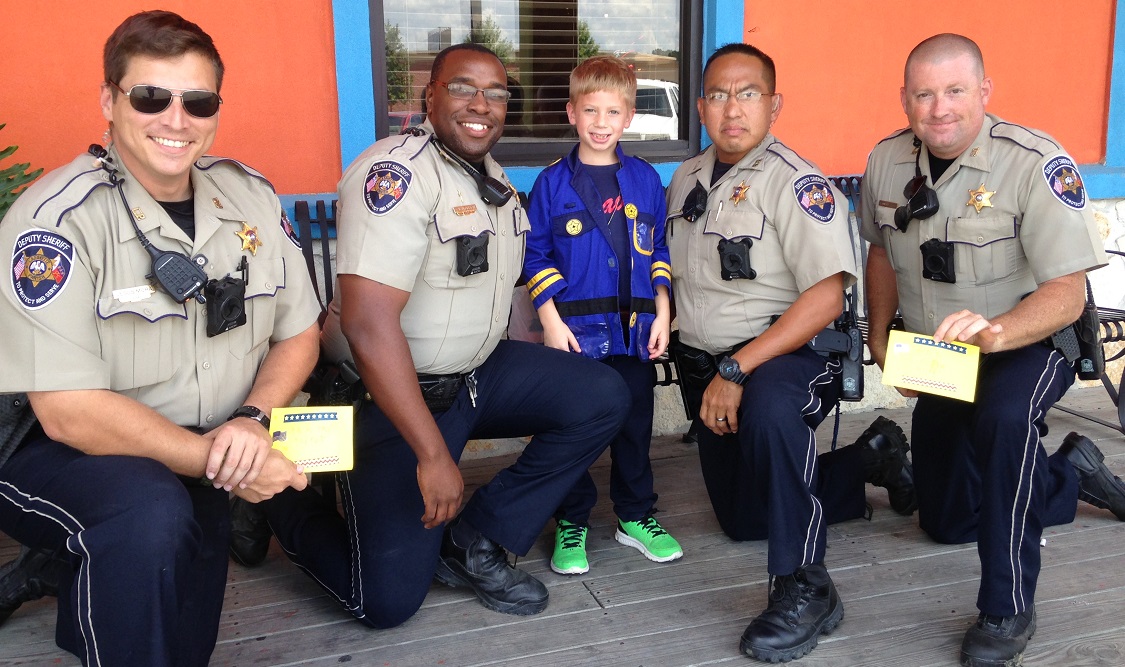 Oliver Perry is a budding lemonade-stand mogul with the heart of a philanthropist. All this and he’s only 7.

The Lafayette, LA, boy earned $325 over the summer selling the favorite drink of little entrepreneurs everywhere, and he wanted to use the money to feed first responders. He got the idea after watching a YouTube video about a child who treated police officers to breakfast. Oliver’s father, Nathan, is a reserve deputy with the Lafayette Parish Sheriff’s Office.

The family are regular guests of the LongHorn Steakhouse in Lafayette, so Oliver’s mother, Lindsay, asked Managing Partner Leon Roberts for help. Leon already was planning to thank police and firefighters on 9/11, so he jumped at the chance to partner with Oliver. LongHorn Steakhouse, like two other restaurants that pitched in after Lindsay described Oliver’s wish on social media, refused to take the boy’s money, which grew to $500 with donations.

“I told Oliver I’d be glad to provide the food because too many people nowadays don’t thank police and firefighters,” Leon said. “First responders don’t get the appreciation they deserve.”

Leon said he and his team filled to-go boxes with steak dinners. He, his wife and kids, and Oliver and his parents delivered them to about 80 first responders at six fire stations, the sheriff’s office and the police station in Lafayette.

Oliver made 100 thank-you cards decorated with flag stickers, and he gave one to each person. “It’s amazing that a 7-year-old wants to give back in this way,” Leon said.

“It made me happy,” Oliver said. “The best part was probably when I got to ride in the fire truck.”

Lindsay said the family appreciates the help they received from the Lafayette restaurant. “We will be LongHorn Steakhouse guests forever. Leon was the first on board with Oliver’s idea to support first responders, and he did all he could to make our son’s dream come true. The number of first responders we were able to feed that day grew exponentially because of the generosity of LongHorn Steakhouse.”

Oliver’s $500 was added to his college fund, and he sent a $100 donation that arrived after 9/11 to St. Jude Children’s Research Hospital.

“Oliver’s little dream just grew and grew, and I don’t believe he had any idea how big it got,” his mother said. “In his eyes, he simply did what he set out to do, which was to feed police and firefighters.” She and Nathan also have two older sons and care for two young foster children.

With the help of a family friend, pizza was delivered in Oliver’s name to a fire station in Brooklyn, NY, that lost firefighters in the World Trade Center attack on 9/11, Lindsay said.

“It is really cool that the actions of a 7-year-old boy in Louisiana were felt all the way to New York.”