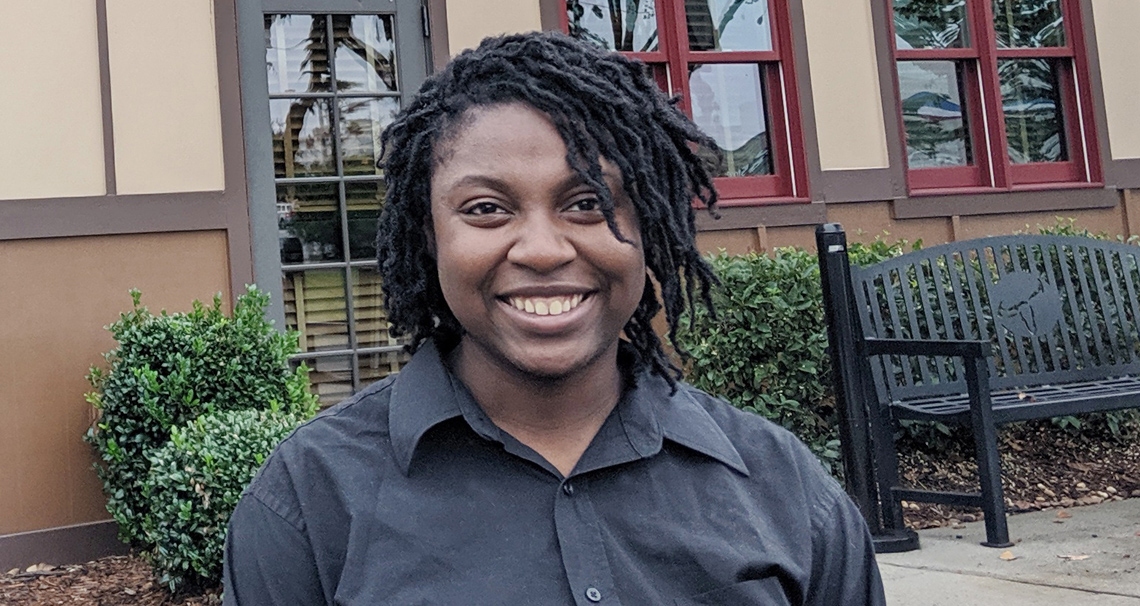 Micheline Dieujuste-Antoine, a team member at the LongHorn Steakhouse restaurant in Warner Robins, GA, does more than serve guests — she serves her country in the Army National Guard.

She reports quarterly for two weeks of service, which consists of field training and drills, as well as additional missions such as providing hurricane relief after Hurricane Michael in 2018. Micheline, who goes by the name Shy, delivered food, water and tarps to storm victims in South Georgia as part of her transportation unit.

“Military service is important because it gives you a chance to give back to something more important than yourself,” she said. “When people think of the military, they picture soldiers in Afghanistan, kicking in doors, but we’re also the ones who bring people what they need to survive after they have lost everything in disasters. Our work teaches us to value what we have.”

When Shy joined the Army in 2013, she was the first member of her large family of Haitian heritage to do so. Her mother and siblings worried about her safety at first but have been supportive.

LongHorn Steakhouse, too, has been supportive of her military service. She joined the brand in 2018, working first at the Macon location, and would like to become a manager someday. For now, she’s grateful for her flexible schedule because the Army has to give only 72 hours notice before ordering her to report for duty. “My managers understand that my military schedule is subject to change,” Shy said. “They will say: ‘Let us know when you’re back, and we’ll put you on the schedule.’ ”

“We were lucky to have Shy join our team because she makes us all better,” said Managing Partner Carly Bateman. “She's guest-focused, a team player and is always there when it counts. Although I know this was her character before she joined the National Guard, I have no doubt these qualities are also instilled by the armed forces. In Warner Robins, we work side by side with and for military personnel, veterans, their spouses and their families every day, and in our restaurant especially, we're grateful for the opportunity to do so.”

Shy said foodservice also offers lessons. “You meet all types of people and learn to be more understanding. Sometimes you’re trying to keep track of a hundred different things, but it’s never boring. You never know what’s going to happen, but everyone from the managers to the dishwashers to the line cooks forms a supportive net.”

Two guests who visited a few weeks ago made a strong impression, she said. The man was suffering from cancer, and a neighbor had given the couple a LongHorn gift card. “They were so happy to be here that at the end of the meal they were crying with joy,” Shy recalled. “They so badly needed that positive experience we gave them.

“In both the military and foodservice, you are sometimes unaware of how little things can add up and become big things that really affect someone.”