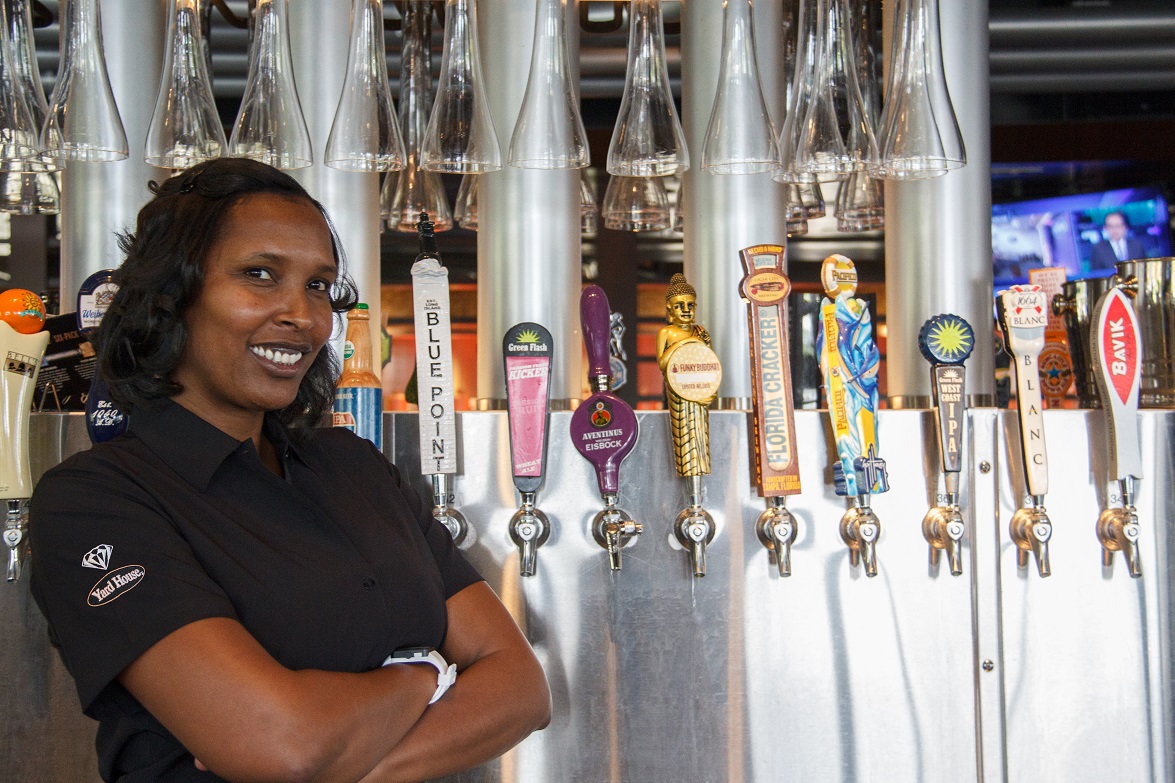 When Raven Maree won a speech contest in the sixth grade about Black History Month, it was a pivotal moment. She began to find the powerful voice she now uses to direct and guide about 300 team members and managers at Yard House restaurants in Florida and Georgia.

As a director of operations, Raven gained a larger platform for indulging in “my favorite thing, which is recognizing untapped potential and persuading team members that they can excel in the restaurant industry. Sometimes people don’t realize what’s right there in front of them.”

Growing up, Raven did not always see what was right in front of her – but her mother did and thought Raven was destined for a foodservice career. “My mother reminds me that I always loved to serve people,” she said. The middle child of 13 siblings, Raven would get up on Saturday mornings, set the table and arrange the house like a restaurant.

Her large, blended family in Los Angeles provided lots of practice. “We were a small village,” Raven said. “My parents opened up their home to neighbors and cousins and aunts and uncles and whoever needed a bed or a sofa. We were a party house, and my parents loved to entertain.”

That upbringing helped Raven form her positive attitude and strong work ethic. “My parents instilled in us the drive to be successful and helped us understand that we will face obstacles because of the color of our skin. That’s just the hard truth. But those obstacles can be overcome.”

She began her restaurant career as a server at the Yard House restaurant in Chino Hills, CA, while she earned a criminal justice degree. As she prepared to join the California Highway Patrol, a hiring freeze put the brakes on her law-enforcement aspirations. Her general manager, David Fought, told her he saw potential in her and encouraged her to work toward a restaurant management career.

Now general manager at the Yard House restaurant in Addison, TX, David said he knew Raven was capable of great things. “She connects easily with others and has a smile and energy about her that others gravitate toward. I knew she would blossom into someone others would look up to. She has a gift for helping team members better themselves, and it comes through as she inspires, coaches and supports others.”

Raven immediately set out to prove David right. She learned the ropes at numerous Yard House locations, including several in Florida, and opened new restaurants in West Nyack and Yonkers, NY. In 2016, as general manager in Orlando, she won Darden’s top honor, Diamond Club, for her commitment to delivering superior guest experiences. At the awards event, she was also recognized as GM of the Year from among all Yard House, Eddie V’s, Bahama Breeze, The Capital Grille and Seasons 52 restaurants.

When she won the Diamond Club distinction, one of her older sisters said something that took her by surprise, that Raven “had become a great role model for young women, especially young African-American women, who might think they can’t do the job.”

“I’ve always mentored people without really thinking about their color,” she said, but her sister’s remark, along with Raven’s attendance at a minority leadership conference, persuaded her to take more seriously her responsibility to the African-American community, partly by sharing her own path to success.

She praised Yard House’s commitment to diversity, saying, “We’re more vocal about it now,” partly because Darden includes inclusion and diversity in its mission and in management training.

“When I mentor African-American men and women, I tell them to take extra care with how they present themselves to others,” Raven said, “so they can carry to future leaders the message that we are just as qualified because of the work we do.”